Monitoring and reporting our air emissions is part of our effort to tackle our impact on the environment. Currently, 92.0% of our cement plants have an environmental management system, ISO14001 or equivalent and is expected that all of them will be covered by such system by the end of 2013. We are actively working on implementing such a system to the remaining facilities. Aligning with CSI recommendations, investment plans are in place to install continuous monitoring devices to cover main pollutants like dust, NOx and SOx at all our cements plants by the next few years.

At Group level, the implementation of an air emissions management system that will increase the robustness of our monitoring and reporting scheme has been delayed due to an extended period of delegations among our environmental experts and is now expected to be completed by the end of 2013.

All of TITAN Group’s facilities have been equipped with dust monitoring and recording equipment which enable regular measurements in accordance with environmental legislation and our commitments.

Continuous monitoring of fugitive dust emissions is not possible. The Group uses a program of periodic measurements in order to safeguard the health of its employees as well as to reduce the impact on areas nearby. Further care is taken to ensure the proper maintenance and optimal functioning of its machinery and equipment and to ensure the rigorous application of rules covering the transport of materials both within the plant site as well as beyond.

In 2012, total emitted dust was 963 metric tons while specific emissions were 83.9g/tClinker, based on 2009 equity held. At all of our facilities continuous efforts are made so as the dust emissions respect the limits set by the environmental terms of their operating permits as well as specific conditions set by the local authorities.

Compared to 2011, Group performance was significantly improved. During the last few years, TITAN Group invested heavily in new technologies to reduce its air emission footprint. Our specific dust emissions were decreased by almost 50.0%, achieving and actually exceeding the Group target. This was mainly a result of commissioning new main dusting equipment at Alexandria plant, Egypt and SharrCem plant, Kosovo. At those facilities electrostatic (ESP) filters were replaced by bag filters, while performance improvements of the existing bag filter system in kiln line 2 at our Beni Suef plant, Egypt resulted in significant reduction of overall dust emissions. Plans for additional investments to install new bag filter dedusting systems to the remaining of our kiln lines are under consideration and will further decrease our footprint, when materialized in the coming years. On top to that, the effort for proper maintenance of the existing dust control equipment is a continuing endeavor. 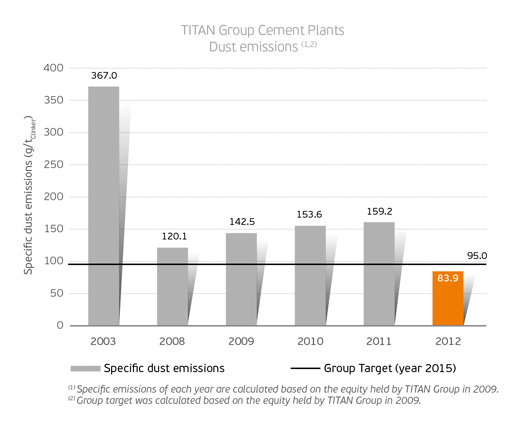 Specific NOx emissions showed deterioration during 2012, closing above the set Group target. Year-on-year increase was about 8.0%, although in respect to 2003 the cumulative reduction came to a significant 40.0%. In the last few years, TITAN heavily invested in technologies that can reduce NOx emissions, like SNCR systems, low NOx burners. Currently, we are actively working on extending the use of such technologies to other plants in our Group, in conjunction with our business plan and the existence of the necessary founding. 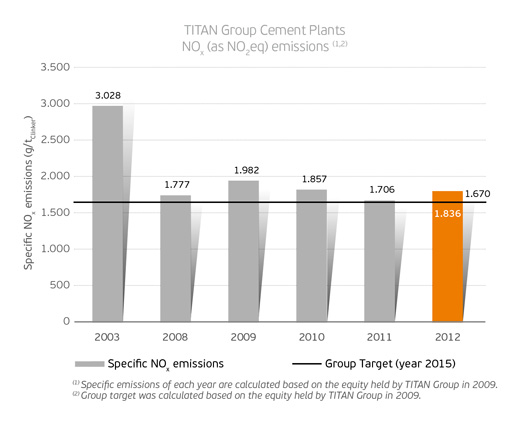 Compared to 2012 specific SOx emissions were decreased by 18.0%, ending below our Group target. Overall performance since 2003 was improved by staggering 60.0%. It should be noted that total emitted quantity was increased due to the increased production. 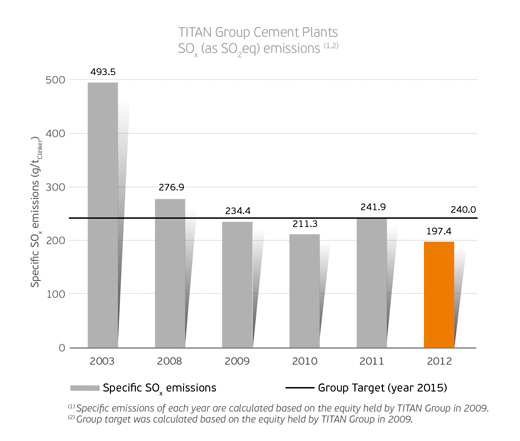