100 years on the Athens Exchange

TITAN GROUP IS A MEMBER OF:

undertaken by TITAN Group in line with its values, Code of Conduct and priorities:

Financial flows to our stakeholders 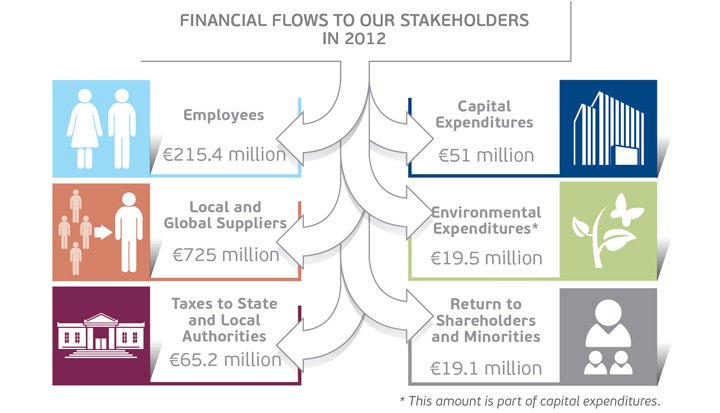 Message from the CEO

Message from the CEO

100 years on the Athens Exchange

TITAN GROUP IS A MEMBER OF:

undertaken by TITAN Group in line with its values, Code of Conduct and priorities:

Financial flows to our stakeholders 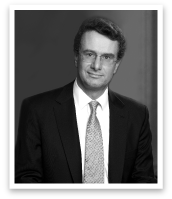 Overall market conditions remained challenging in most of our markets in 2012. In Southeastern Europe, the state of local economies, affected by the Eurozone crisis, deteriorated, driving demand for our products lower. In Egypt, demand proved resilient, but significantly increased input costs and new production capacities combined to adversely affect operating margins. In Greece, in the context of an economic depression, demand for building materials is estimated to have declined by a further 35%, to below one quarter of its level in 2006. On a more positive note, sales remained high in Turkey and started to recover in the U.S.A., albeit from a very low base.

Within this context, we took appropriate initiatives: we implemented a restructuring plan to reduce costs, yielding over €25 million of annual savings; we generated free cash-flow from operating activities of €140 million; we reduced net debt by €112 million, with the help of disposals.

Despite our efforts, EBITDA declined by 19.8% to €196 million. The Group posted a net loss of €24.5 million. This is the first time since 1951, that TITAN records a loss. The Board of Directors has decided to propose to the AGM of shareholders that no dividend be distributed for fiscal year 2012.

As we enter the sixth year of a long and severe crisis, the time is opportune to make a critical assessment of the past, as well as to plan for the future. During the decade prior to 2008, TITAN profited from attractive market and growth conditions. We rode the wave to transform the Group from a Greek producer with a stake in a U.S. plant and a total capacity of a little over 6 million tons to a 25 million ton multi-regional, vertically integrated producer, with a diversified geographical footprint across four continents. In the process, we maintained a return on capital employed well in excess of our cost of capital, creating value for our shareholders. We achieved this while living by our values of respect for people, society and the environment. And we did so proactively, going above and beyond what was required of us: we not only tried to “do less harm”, but pursued opportunities to “do more good”.

Starting in 2008, we shifted priorities in order to adjust to new realities. For the past five years we have been single-mindedly and consistently focused on a few key priorities: generating free cash-flow to increase financial flexibility, reducing costs to adjust to lower demand, and pursuing bolt-on growth initiatives, mostly to grow our presence in emerging markets.

Since 2008, and despite the collapse of our two most important markets, Greece and the U.S.A., we have reduced debt by almost 50% to just €596 million at the end of 2012. We have expanded capacity by almost 20%, mostly in emerging markets. We have reduced fixed costs by 16%, SG&A by 22%, and more than that on a like-for-like basis; and we achieved this without making a capital call on our shareholders.

As importantly, throughout this crisis, we have also retained our focus on the triple bottom line: we have accelerated our efforts to improve our safety culture; we have invested to reduce our carbon footprint with, to date, more limited success than we would have wished, but doing a lot of the groundwork for future improvements; we have taken a number of - often innovative - initiatives to engage our stakeholders at the local level; and we have intensified our engagement at the global level, in particular through our own commitment to the Cement Sustainability Initiative within the WBCSD and to the U.N. Global Compact.

Corporate Social Responsibility is deeply embedded in our Values and our way of doing business, as has become apparent throughout our history and during this time of crisis. We have thus been encouraged to change the way we report this year: 30 years after TITAN became one of the first companies in Greece to issue a separate Social Report, in addition to the Annual Report, we have taken the next step forward in merging the two traditional Reports into one integrated Report. We believe this approach, in line with what is today increasingly viewed as best practice, better reflects the fact that CSR is not ancillary to our business, but forms an integral part of it.

Positioned for the future

2013 is expected to be another demanding year for TITAN. Markets in Southeastern Europe will continue to be adversely impacted by the Eurozone crisis. Demand for building materials is not expected to recover soon.

The economy in Greece will contract for the sixth consecutive year. Both housing and infrastructure spending face significant headwinds. It is therefore anticipated that there is scope for further decline in demand for building materials from current low levels, at least for the first half of 2013. In Egypt, political and economic woes appear to be escalating in recent months and uncertainty is high. Against such a backdrop, the smooth operation of the plants is challenging and production costs have been increasing. Although current estimates suggest cement demand will remain resilient in 2013, the increase in the cost of production and the weakening of the Egyptian pound are expected to negatively affect results.

On the positive side, market conditions remain positive in Turkey. Also importantly for TITAN, the residential market is now clearly recovering in the U.S.A., thereby benefiting the market for building materials.

Given the considerable uncertainties of today’s outlook, we remain cautious, choosing not to change our conservative stance of the last few years. When confidence and broader growth in our markets return, we will be well positioned to capture the upside. We have good assets in good markets; we have a healthy balance sheet and a lean structure; we have significant operating leverage out of existing assets; and, most of all, we have committed and motivated people.

Please join me in thanking them for their contribution and their continuing efforts.