Managing our Impact on Water

In 2012, specific water consumption of our cement plants was further decreased, by 14.0% compared to the previous year, reaching 298.4 lt/tCement, and remaining for the second consecutive year at levels below the Group target of 350.0 lt/tCement. This progress reflects all actions taken the past years for the efficient water management in our cement plants, and provides a challenge for re-considering and setting a new target for lower specific water consumption in the coming years. It is believed that further improvement in our water footprint is possible, by reducing the volume of water withdrawal and consumption. The on-going project for installing a recycling system for mechanical cooling at Kosjeric cement plant is expected to reduce the needs for freshwater that is currently withdrawn from the nearby river.

Further, 25.2 million m3 of water or approximately 80.0% of the total withdrawn volume were recycled to cover total water needs on Group level. Total volume of recycled water in the cement plants operations reached 17.2 million m3, which corresponds to about 215%, or more than twice, of the water withdrawn volume.

As part of the Group’s Environmental Policy and in line also with the Cement Sustainability Initiative, TITAN set targets and developed a vision with regards to water management in its Group operations, aiming to increase awareness, improve efficiency, decrease and manage water risk, and align with CSI on reporting and best practices, while leading by example. Under this framework, 2012 was the year for developing a Water Management System on corporate level for use by the Group ready mix facilities, which together with the similar system already developed for the Group cement plants fulfill the set Group target. Full integration, especially in the large number and widely distributed ready-mix plants, is expected within the next 1-2 years.

A first round of Global Water Tool road test was made in 2012 with TITAN Cement Plants, as the initial approach for water risk assessment in our company’s portfolio. The assessment showed that 20% of our Cement Plants, representing 26% of total cement production in 2012, are operating in areas (on watershed level) of ‘extreme scarcity’ (<500m3/year/person Renewable Water Supply [RWS], as projected for year 2025). 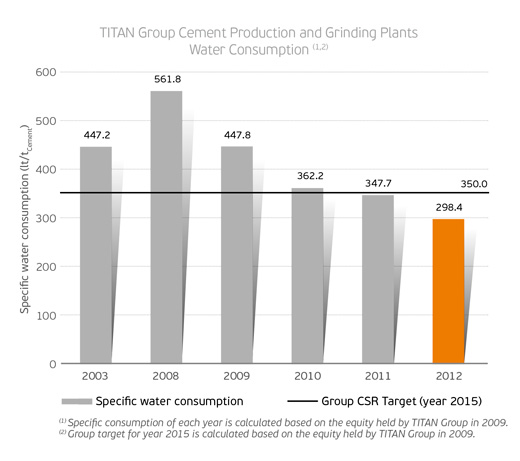 Note: The site of ‘no data’ shall also be included in the areas of ‘extreme scarcity’, taking into consideration the neighboring watersheds 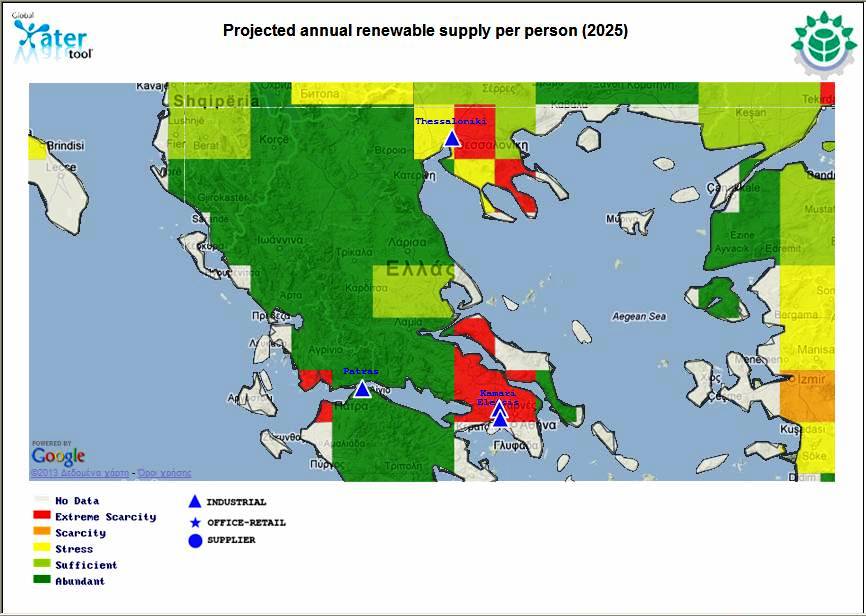 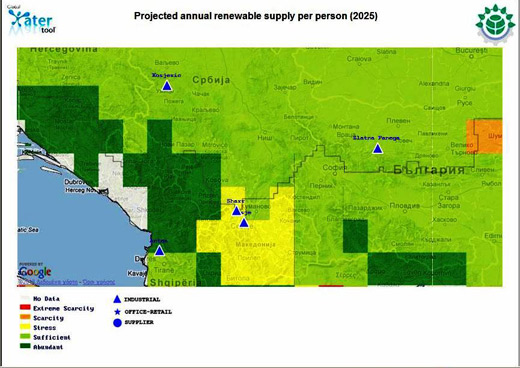 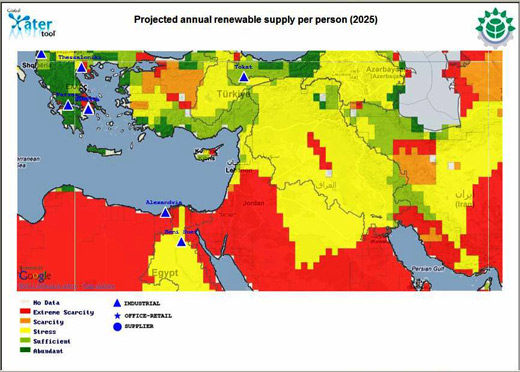 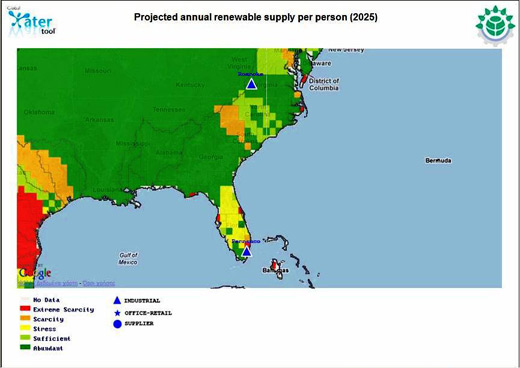 In three of the plants operating in areas of ‘’water stress’’, focus hydrogeological studies have been already conducted (Usje and Pennsuco plants) or are in completion stage (SharrCem plant), and thus water risks and associated actions for sustainable water management have been identified. Similar study and detailed water modeling to assess risks and opportunities at local level are planned to perform for at least one of the ‘extreme scarcity’’ areas in the next two years. Road testing of Global Water Tool will continue with TITAN Group aggregates quarries and ready-mix plants in 2013-14.

Water risk assessment on local level was made for the Zlatna Panega cement plant in Bulgaria, by applying the Local Water Tool and using also the results of a Hydrological and Hydrogeological Study, concluded after a two-year period of survey in the general area of the cement plant and quarry, being in proximity with environmental “sensitive” waterbodies. The outcome of the study and the water risk assessment will help the plant in developing a management plan and ‘’road-map’’ for water, in order to mitigate impacts and risks, that among others includes: local stakeholders and water-relevant NGO’s awareness/engagement/partnership, improved and efficient water and overall environmental management in the plant and quarry, and monitoring of groundwater quality.