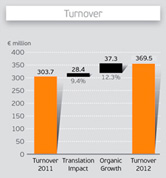 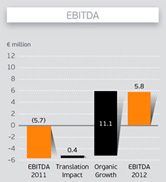 Private non-residential construction increased in 2012 by an estimated 17.6% to $303 billion having been driven higher by investments in the energy and power sectors. On the other hand, public spending declined for the third consecutive year, falling 2.6% to $276 billion.

U.S.A. cement consumption increased by an estimated 8.9% in 2012 to 78.5 million tons – still more than 50 million tons lower than the record level set in 2005. A mix of temporary and permanent plant closures in the U.S.A. since 2008 has reduced capacity, but utilization rates are estimated to have remained below 65%, on average, in 2012.

U.S.A. Operations
The South Atlantic region (which includes Virginia, the Carolinas, and Florida) fared better than the U.S.A. as a whole, with cement consumption increasing 9.8% over 2011 levels. While the positive trend in volumes (albeit from a very low base) provided some relief, our U.S.A. business remained affected by a stressed pricing environment.

Florida
According to the U.S. Geological Survey, cement consumption in Florida was 4.1 million tons in 2012, an increase of 14% over 2011. While better than in 2011, market demand was not high enough to keep utilization rates at satisfactory levels.

New York / New Jersey
According to the U.S. Geological Survey, cement consumption in the New York Metropolitan area was 1.2 million tons in 2012, an increase of 2% over 2011. TITAN America’s Metro New York business experienced a meaningful increase in demand, but a weak pricing environment.