Our operations are local and primarily serve local needs for housing, infrastructure and the like. Apart from opportunities for employment, TITAN operations offer a variety of opportunities for collaboration with local companies and individuals. Moreover, TITAN has always considered as key to its long-term sustainability the close collaboration with local communities. The Group’s Social Policy, designed in order to maximize the added value created by its operations for the communities that are more closely related to company operations is "reaching out and adding value". This policy includes not only contributing financially to the well-being of communities (either in cash or in kind), but also providing other valuable human, technical, educational and technological resources to achieve the best outcome. This policy suggests a collaborative approach to everything we do. It has been tested successfully in areas where the Group has had a long-term presence and is bearing positive results in other areas.

In 2012, TITAN Group continued to implement its Social Policy with emphasis given to collaborative action, raising awareness and support to the most vulnerable, such as children in need and young people facing unemployment.

Long-term programs at the country level continued this year, such as the MBA Forum in Greece, Partnership with Schools in F.Y.R of Macedonia, and establishment of the CSR Network in Albania. Successful examples were branched out into other countries, such as the cooperation with REC for environmental training in public schools that was duplicated in Albania after similar success in Bulgaria. Likewise, the new cooperation initiative with BEST started at the Patras plant and expanded to Thessaloniki, while the “Safety at Home” program started in Thessaloniki and expanded all over Greece in less than two years. For more information on these and other local projects, see the Group performance by region and country section of this Report.

Responding to local needs also means taking action to support the most vulnerable when in need. In Bulgaria in 2012, TITAN fully funded the building of new houses for the villagers of who lost their homes completely in massive floods.

The total direct expenditure for TITAN Group in cash and in kind for 2012 was 1,075.7 million euro.  Figures are included here for the last five years. 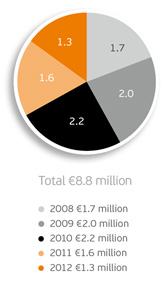