Managing our Impact on Land

Quarries rehabilitation and biodiversity management are a key focus area for TITAN and its CSR priorities, and rehabilitation plans have been developed and actively implemented in the Group’s quarry operations. Prompted through participation and co-chairing of the WBCSD/CSI Biodiversity and Land Stewardship Task Force, TITAN has been active also in assessing biodiversity at its quarry sites, aiming finally at developing specific management plans for the preservation and enhancement of biodiversity.

The Guidelines on Quarry Rehabilitation, released at the end of 2011 by WBCSD/CSI, and included in the updated CSI Charter, as a commitment for application by the companies, are being communicated within TITAN business units, as a tool for supporting new rehabilitation plans or improving existing ones at company’s quarry operations.

Led by TITAN, and following a period of road testing, the Guidelines for using the Integrated Biodiversity Assessment Tool (IBAT) were developed by the CSI Task Force. The IBAT is the common adopted specific screening tool for identifying high biodiversity value areas, and supporting alignment of reporting for CSI Biodiversity KPIs. The IBAT guidance document and the experience gained from the 2012 road test was also addressed in the new ‘Ecosystem services and biodiversity tools to support business decision-making’ (‘Eco4Biz’), which is currently being developed by the Ecosystems Focus Area of the WBCSD. TITAN made an annual subscription for 2012 and used the IBAT for screening its quarry sites.

(1)Two pozzolanas quarry areas in Northern Greece (Apsalos, Pella) are considered as one entity, since they are in close distance with each other, served by the same access and transportation road, and are within the same protected area (see.: “Definitions” for the CSI Biodiversity and Local Impact KPI’s).

TITAN is in the progress of formulating more systematic Biodiversity Management Plans (BMP) for Zlatna Panega quarry (Bulgaria), Pennsuco and Center Sand quarries (U.S.A.) that will later be adjusted in alignment with the Guidance for BMPs that will be produced by CSI TF within 2013.

Cement Division Greece has assigned to the Hellenic Society for Nature Preservation and the Hellenic Birdlife Society, experts in ecosystems, to conduct biodiversity studies for the ‘‘baseline’’ assessment in three quarries of Greek sector that fall inside areas of high biodiversity value, namely: the pozzolanas quarry in Milos (within NATURA), the pozzolanas quarries in Pella (within NATURA), and one aggregates quarry in Crete (within ‘’wildlife refuges’’ area). The studies are expected to last two years until the baseline assessment for various species will be established and BMPs, seen as final outcome of the studies, will be proposed in 2015. This assessment will help identify the number and type of specific species under protection and the importance of their preservation, as included in national or international conservation or protection species lists (like IUCN Red List of Threatened Species).

With respect to our Group quarries environmental performance targets, almost 100% of our wholly owned active quarries (as of 2009) have been certified with ISO 14001 or equivalent systems, and for 63% of them an EIAS has been developed and a Rehabilitation Plan is in place and implemented. 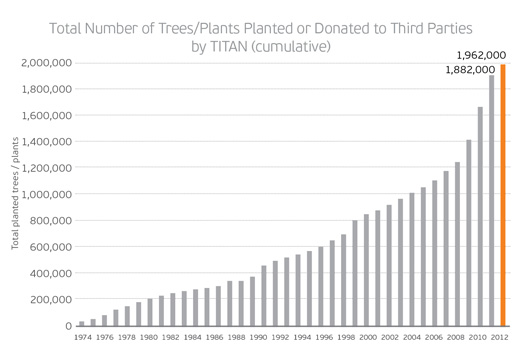 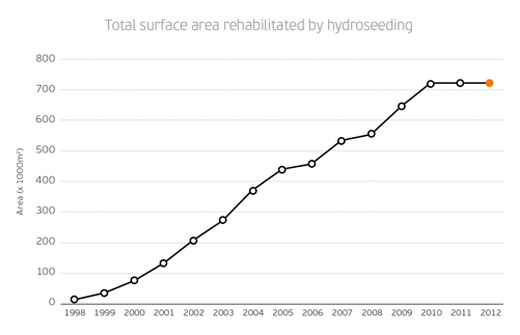