Wages and benefits
Guarantee a wage that - at a minimum - meets national legal standards and additional benefits responding to the needs of the majority and local priorities.

Forced labor
Prohibit any type of forced or bonded labor.

Freedom of association
Respect the right of people
to form and join associations
and to bargain collectively.

Engaging with our Employees

Wages and benefits
Guarantee a wage that - at a minimum - meets national legal standards and additional benefits responding to the needs of the majority and local priorities.

Forced labor
Prohibit any type of forced or bonded labor.

Freedom of association
Respect the right of people
to form and join associations
and to bargain collectively. 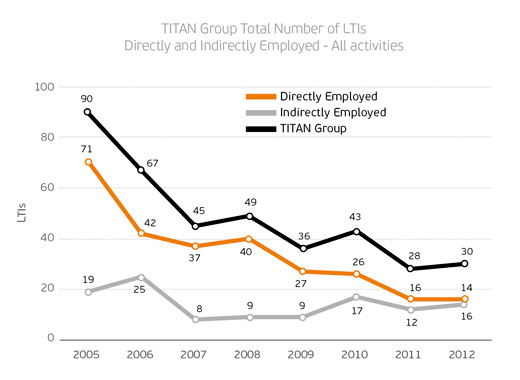 The LTIFR for our employees improved by 7.4% and we are moving in the right direction towards achieving our goal of being among the top performers in the industry. 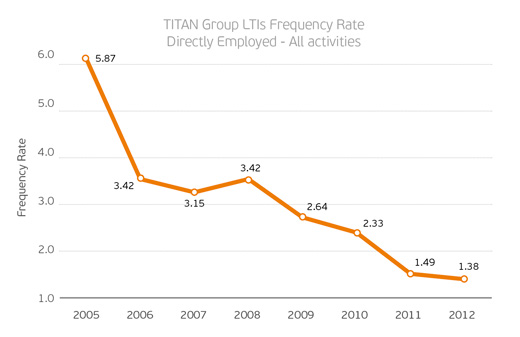 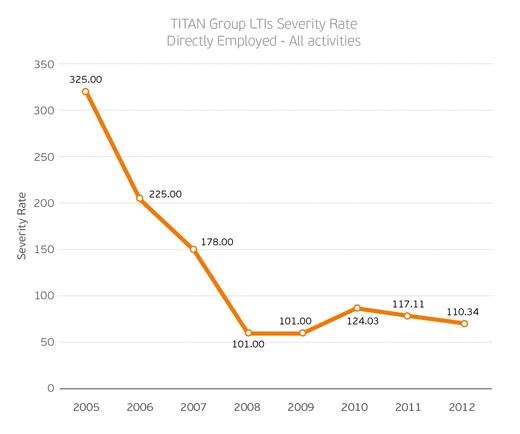 Health and Safety
Health is identified as a decisive factor for the well-being of our employees and the communities around our operations. Exposure to dust and high temperatures, contact with allergic substances and noise exposure are among the issues that are systematically assessed, monitored and controlled through health and safety risk assessments and relevant programs aiming to minimize potential impacts of TITAN operations on the health of our employees and all relevant key stakeholders. Significant investments are made particularly to prevent dust emissions; accordingly TITAN has reached an outstanding level of performance (see section “Dust” in Environmental performance”), yet continuous efforts for further improvements can always take place. Accordingly, in 2012 a special program was implemented to improve the conditions with respect to noise in the Thessaloniki plant (see case study).

To support the health and well-being of our employees, occupational physicians provide their services in all plants following local regulations, while a nursery is available on TITAN premises for all employees including contractors. Moreover, medical care programs, additional to those provided by local law, are offered to all employees to allow for a more preventive approach to health care problems.

Health care lectures are organized in all Group companies and well-being initiatives have already been launched in the U.S.A., Egypt and Albania.

Health and Safety topics are covered in all formal agreements with trade unions.
Health and Safety continued to be a top priority for the TITAN Group in 2012. Notwithstanding our intensive efforts, however, a fatal accident occurred in our Pennsuco (Florida) cement plant in the U.S. in August (read more here).

One of our employees was engulfed in a cement silo when the roof of the silo he was working on collapsed. The cause of this catastrophic failure was traced back to design and construction flows that dated 30 years ago, well before the acquisition of the plant by TITAN America.

This event triggered a redoubling of our efforts with respect to rigorously investigating all incidents to reveal their root causes and learning from them in order to avoid reoccurrence anywhere in the Group. In this case, although the inspection of the condition of the steel and concrete structures in our plants has been integrated within our preventive maintenance systems, this particular type of failure was difficult to be detected or predicted. After this unfortunate event, we started looking deeper into the condition of the concrete structures within the context of preventive maintenance using new non-catastrophic methods.

During this past year, we once again concentrated our efforts on improving leading indicators (those dealing with future performance) rather than the lagging ones (which describe what happened in the past).

Reported near misses, although significantly fewer than last year (1,380 versus 1,888 in 2011), helped us improve our knowledge since 96% of them were investigated and lessons learned were disseminated to the whole group. The total number of reported near misses in the Group is expected to decrease in the future while the average Group safety culture is improved.

With respect to contractors and driving safety, we are aligned with the guidelines and the implementation plans identified by CSI. The progress made so far is significant and we are on schedule regarding the completion of the implementation phase by the end of 2014.

All group cement plants were audited internally for their safety performance, major areas of improvement identified and an action plan for necessary improvements developed.

In addition to safety at work, we are actively participating in the working groups established by Cembureau and CSI to cope with issues related to Occupational Health. At the same time we continue offering to our employees programs for preventative health examinations and encourage them to participate in these programs.

The year 2012 was a year rich with safety activities related to corporate social responsibility. More than 3,000 students in elementary and high schools, along with their parents and teachers, received training lessons related to safety at home and school. The initiative started several years ago in Greece and now has expanded to the countries in Southeastern Europe where the TITAN Group is present.

In 2012, a new initiative related to training students of technology was launched in Greece in cooperation with the students’ organization BEST (Board of European Students of Technology). Our vision is to offer engineering students valuable preparation for their professional careers through training on safety at work.

Joining efforts with other businesses engaged in the same industrial areas as us to increase safety awareness among contractors’ employees has also been an innovative idea which has been widely esteemed by our stakeholders.